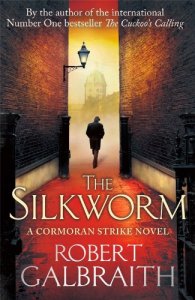 The large unshaven man tramping through the darkness of predawn, with his telephone clamped to his ear, grinned.

« How d’you know where I live? » demanded the voice.

« Fuck that. Come into the office later… »

« Culpepper, I’ve got another client this morning, he pays better than you do and I’ve been up all night. You need this now if you’re going to use it. »

A groan. Strike could hear the rustling of sheets.

« Smithfield Café on Long Lane, » said Strike and rang off. «

Paper rustled under his feet. Looking down, he saw a smattering of takeaway menus and an enveloppe addressed TO THE OCCUPIER/CARETAKER. He stooped and picked it up. It was a brief, angry handwritten note from the next-door neighbour, complaining about the smell.

Strike left the note fall back onto the doormat and moved forwards into the hall, observing the scars left on every surface where the chemical substance had been thrown. To his left was a door; he opened it. The room beyond was dark and empty; it had not been tarnished with the bleach-like substance. A dilapidated kitchen, also devoid of furnishings, was the  only other room on the lower floor. The deluge of chemicals had not spared it; even a stale half loaf of bread on the sideboard had been doused.

Strike headed up the stairs. Somebody had climbed or descended them, pouring the vicious, corrosive substance from a capacious container; it had spattered everywhere, even onto the landing windowsill, where the paint had bubbled and split apart.

On the first floor, Strike came to a halt. Even through the thick wool of his overcoat he could smell something else, something that the pungent industrial chemical could not mask. Sweet, putrid, rancid: the stench of decaying flesh.

He did not try either of the closed doors on the first door. Instead, with his birthday whisky swaying stupidly in its plastic bag, he followed slowly in the footsteps of the pourer of acid, up a second flight of stained stairs from which the varnish had been burned away, the carved banisters scorched bare of their waxy shine.

The stench of decay grew stronger with every step Strike took. It reminded him of the time they stuck long sticks into the ground in Bosnia and pulled them out to sniff the ends, the one fail-safe way of finding the mass graves. He pressed his collar more tightly to his mouth as he reached the top floor, to the studio where a Victorian artist had once worked in the unchanging northern light.

Strike did not hesitate on the threshold except fot the seconds it took to tug his shirt sleeve down to cover his bare hand, so that he would make no mark on the wooden door as he pushed it open. Silence but for a faint squeak of hinges, and then the desultory buzzing of flies.

He had expected death, but not this.